The next day Brandon took us out to see the man-made islands in Dubai, called "The Palms." Here is an internet stolen image with an aerial view of The Palms so you can get the idea of it being created in the shape of an actual palm tree. There are three "palms" in Dubai.
We saw "Palm Jameirah." 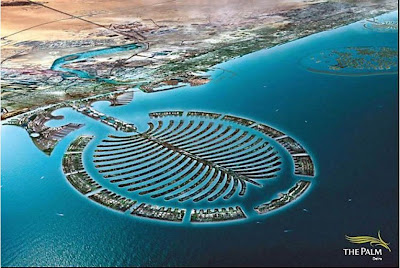 Dubai basically hauled in the sand and rocks to create the islands. Brandon told us the whole project was overseen by the Dutch, as they are well educated on how to control the ocean, and prevent erosion.
They built up the islands, and then built on top of them. I will say this about Dubai. They do not do things half-assed over there.
It is go big, or go home. 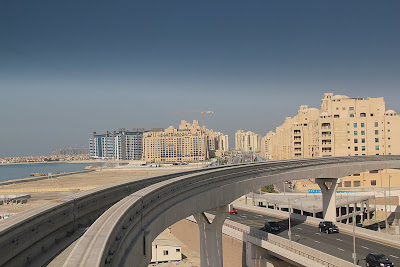 It was crazy!
They have a monorail that takes you right down the center of the palm.
The beauty of the set-up, is that each house, townhouse, building or whatever- is waterfront property. 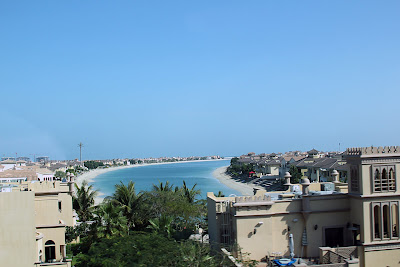 A great idea, except that they ran out of money during construction.

So sad in Dubai. A good portion of Dubai is unfinished. Lots of bare scaffolding, and cranes standing unused. Lots of half-finished condos that are unoccupied.
Here is a prime example: 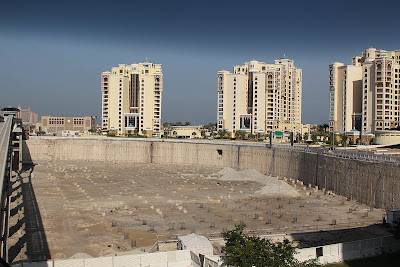 This big vacant pit to the side of the monorail was supposed to be Trump Tower.
Atlantis is finished,however, and man, that thing is huge! 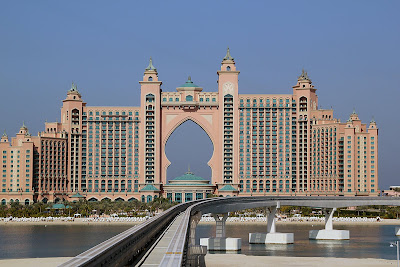 It has a ginormous water park.
My kids were salivating.
For the low price of $319.00, we could have taken them there...
Not happening.

The monorail gave us a pretty good view of a couple more famous hotels in Dubai, the one that looks like a sailboat is called the Burj Al Arab. It is the world's only 7 star hotel. 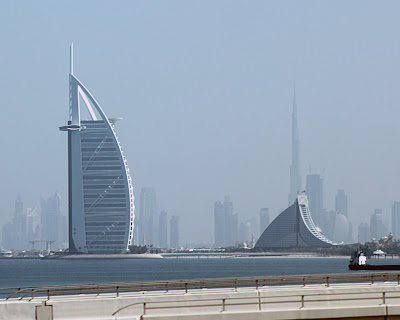 The hotel next to it, that is shaped like a breaking wave was only six stars. I forget what the name of that hotel was, and only being six measly stars, I guess it is pretty forgettable...they probably don't even have breakfast waffles.

After the Tour de Palm, we headed over to the Muslim Mosque. 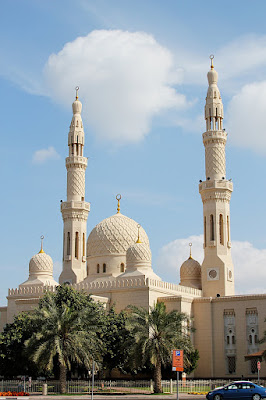 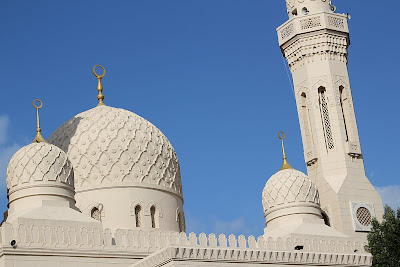 I was completely fascinated.
I like to learn about religion, and it is always interesting to me to pick out religious similarities and differences.
This mosque in Dubai is the only one in the UAE that allows non-Muslim folks to tour it. It was called the "Sheikh Mohammed Centre for Cultural Understanding." I loved that. They highly encouraged questions and photos.
Religious animosity could be completely prevented with good old fashioned tolerance and understanding.

Our Muslim hostess was a convert from Christianity, and she was awesome! 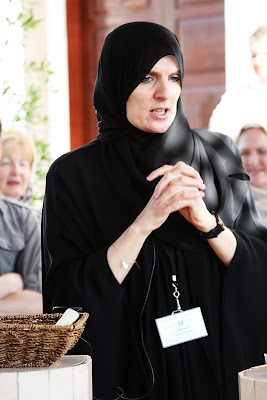 She explained things really well, and cleared up a lot of common misconceptions that are out there concerning the Muslim people.
We started outside the mosque, where she explained that to enter the mosque for worship,(not for our general tour)required a specific washing. This was a way for them to prepare themselves physically, as well as mentally for prayer.
My boys were picked to be demonstrators. 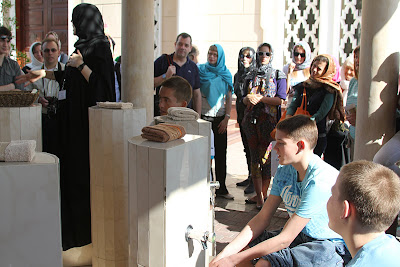 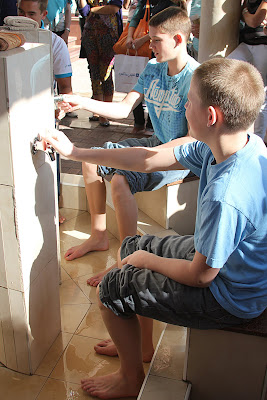 You can never wash the feet of boys enough, I say.

The washing includes feet to the knees, hands to the elbows, nose, mouth, and head.(just a quick washing up and behind the ears) This is done five times a day- before each prayer. You do not have to re-wash, however, if you stay "clean" between prayers. "Clean" meaning, if you do not use the bathroom, have uh, "adult relations", vomit, have a bloody nose, or fart.
If you are clear of that list, your previous washing is still valid and you can skip the washing thing for the next daily prayer.
Whew!
That is some commitment.
Just paying attention to if I farted or not would make me quit being Muslim after a day.

The women were required to cover their heads to enter the mosque.
The provided us scarves.
They were freshly laundered, folded and pulled out of boxes. 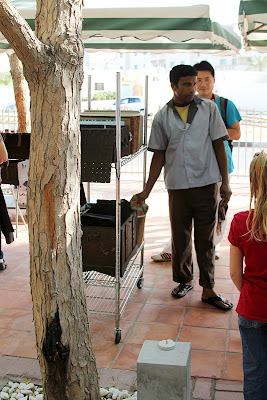 No head lice to swap.
They also handed out water to everyone. I thought that was a thoughtful touch.
See how cute we are? 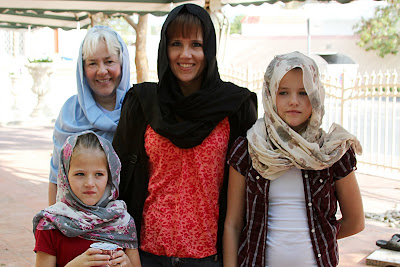 We were also required to remove our shoes before going inside the mosque.
It was very pretty inside. 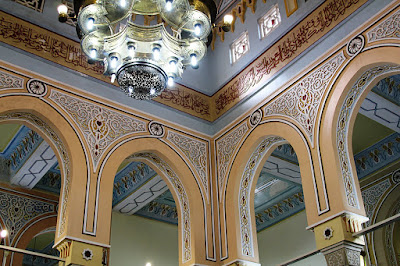 This particular mosque was built in 1971, so it is not that old.
In fact, it is not old at all...now that I think about it, considering *some* of us were born in 1972, and could still be mistaken for a super young almost teenager...
Our cute hostess taught us about the different garments worn by Muslims, and why they wore them. Here she is explaining that the Burqa (head/face covering for women) was originally worn to keep the desert sand out of your eyes and mouth. Now it is worn more for tradition, and style. 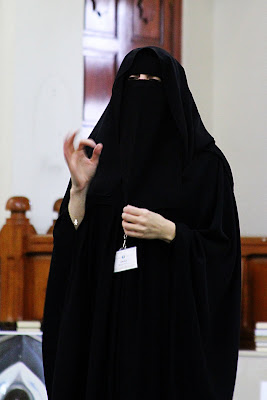 We had a man demonstrate for us the daily prayer: 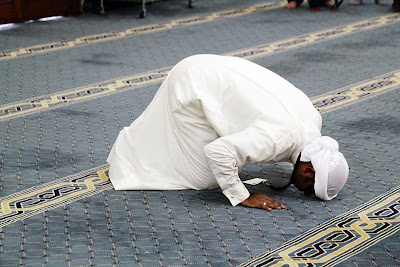 (Again, we were encouraged to take photos. Normally I wouldn't be brave enough to snap shots of someone praying...even paparazzi mom has her limits.)
The hostess explained that when Muslims pray, wherever they might be, they must face Mecca. Mecca is the Holy City of Islam located in Saudi Arabia. 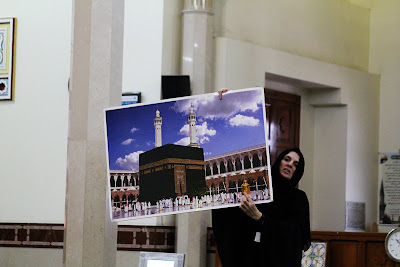 For someone as geographically challenged as myself, I found that to be another obstacle. I can never tell my north's and south's. Pizza delivery was never a career choice for me.

Muslims pray five times a day.
At any given place in Dubai, you can hear the "call to prayer," usually from two locations at the same time. They have mosques on every corner, kinda like Starbucks in the states.
The "call to prayer" is a reminder that it is time to roll.
To wrap things up, and get over to the mosque, or to a prayer room.
There are prayer rooms everywhere in Dubai. Usually located conveniently next to the public restrooms, so you can quickly wash up, and then enter the adjoining prayer room.
The "call to prayer" is broadcast over loudspeakers.
It is a pretty, and almost like a song sung in Arabic.
The prayer times coincide with the rising and setting of the sun.
The mosques have a time board, that change slightly with the seasons, to let you know exactly when prayer times are. 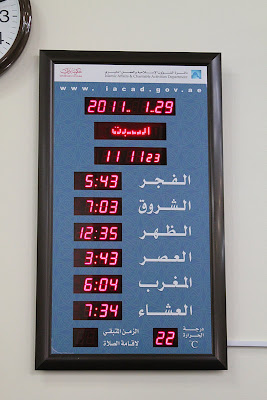 There were a lot of pretty mosques in Dubai.
I liked this one with the blue tile: 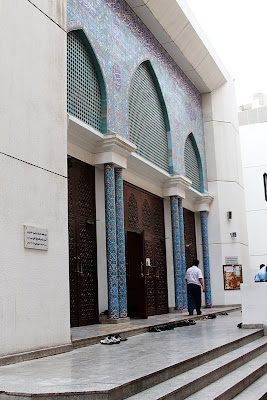 This one I shot through the windshield:

Can you believe I have been blogging for over an hour?
Holy crap.
These photos are so very painfully slow to upload.
You better appreciate this! You hear me, Hollie?
That is all I have for today, I have to go and scrounge something up for dinner.
Posted by Unknown at 3:22 PM

I am loving all of these pictures and stories! It feels like Christmas every time I open the computer and see a new post. Love the picture of all of you girls in the head thingy...sorry I can't remember what they were called. I'm learning all sorts of new words from your posts!

I can not get over your trip & I haven't heard about it all yet! Waffles or not those hotels look amazing! ;)

i do appreciate your blogging all about your trip. we NEVER travel, so i'm living out a vacation thru your stories. lol! looks like an amazing place to visit.

WOW Shaunte - FAB photos and that Baraque - headscarf really suits you! *Ü* The 'wave' hotel that you were referring to is called the Jumierah Beach Hotel. We went to Dubai in March 2000 - when the Burj Al Arab first opened. We managed to get a table for dinner but it cost us £40 just to step over the entrance mat. The money was then deducted from our dinner bill. I HAD to go to the bathroom just to see what it was like and there was a young lady standing at the basins ready to hand me a towel after I had washed my hands. I took a photo of her to make her feel that her job was important....I mean just how long can one stay in the toilets doing that job?! LOL. It's another world out there for sure. TFS. ~Glen~

Very well written..I lived in Bahrain, which is a neighboring country to Dubai for 16 yrs....never took chance of going to Dubai, although it was so cheap and short flight. Culturally all these countries are similar, so didn't find the need to...but now I feel I should have. Mayb some day i will visit that part of the world once again.