I need to back-track a little and mention the inspiration for our trip to Dubai.

Well, a couple of years ago, Sam's grandma passed away.

At her funeral Sam introduced me to his favorite (hot <--his words) cousin, Andrea and her cute family. 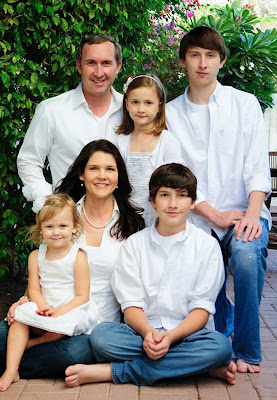 Everyone was excited to see her, because she and her husband and family were living in Dubai, and they hadn't seen them for a while.

During the course of our conversation, she offhandedly invited us to come visit her in Dubai. I am sure she did not fathom, (poor thing) that we would take advantage of her, and actually come. (Like locusts.)

In our travels we have seen a lot of South America, (Sam speaks Spanish) and thought that with her living in Dubai and able to show us around; it would be a safe way to experience the Middle East- a different world culture.

So there we were.

She said she was excited for us to come?
You know, cause everyone looks forward to adding nine house guests.
(For the record, she and her family were beyond awesome, and we are so grateful for their hospitality. More on that later.)

So back to New Orleans.

I do need to back-track yet again, and mention that on the flight from Salt Lake City to Atlanta, we did NOT get first class seats.

This means we were compelled to suffer the indignities of coach.
We did not get the necessity of a hot towel at boarding.
Nor did we get the standard mid-flight snack of oven-warmed gourmet nuts. (I am sure there is a joke in there somewhere...)
Somehow we managed to survive.
Barely.

During that same flight, however, in first class, was Andie Macdowell.
She was in Salt Lake for the Sundance Film Festival. 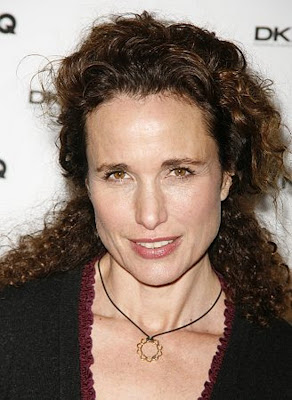 You may recognize her from her movie "Groundhog Day" or what could alternately be titled "My Life."
Living the same darn day, over, and over, and over...
(Cook, laundry, clean, carpool, repeat.)
I wanted to somehow telepathically tell her how much her work means to me!
That "Groundhog Day" is perhaps, the iconic theme to stay at home mom's everywhere!
And it brings hope...that one day, it will all end.
The nightmare of repeating mundane mom tasks will eventually end.
Am I right?

Back to New Orleans, again.
New Orleans to Atlanta.
Atlanta to Dubai.
Boarding that plane, we DID get first class.
Well, six out of seven of us did.
Brendan volunteered to take one for the team, and sit in coach.
I felt super guilty.
Then I realized old folks need all the help they can get to attempt sleeping on a plane, and that kid?
He could sleep through a NASCAR event, standing up.

We were served dinner on that flight.
Some hoity-toity chef-to-the-stars concoction of things I could not pronounce even though the menu appeared to be in English.
There was a slab of meat of some sort, and an artistically placed glob of finely diced...things? The only thing, of the things, I had even heard of was "pickled daikon" and the only reason I knew what that was is because I am a die-hard fan of "Chopped" and that was one of the mystery ingredients in the basket once.
The food was edible but too fancy and not that great.

Meanwhile, back in coach, Brendan was served up a hearty Turkey Club Sub sandwich, potato salad, and an Oreo brownie.
Dang. It.

We passed the time sleeping in spurts.
Dubai is 10 hours different in time zone to us, and we would be landing at night, and needing to go to bed. We really didn't know what to do with ourselves.

I just need to mention here, that I rocked the "In-Flight Trivia."
I OWN that game.
If you ever take a flight, and play against the moniker "MOM", prepare to lose.

Andrea's husband, Brandon picked us up at the airport.
The first thing we noticed was the warm weather!
YAY! Dubai is in the middle of winter now, with temperatures dropping to the mid-70's. HAHA! Winter....
In summer it is a blistering 130 degrees.
Can't. Imagine.

The shopping malls in Dubai seem to be the social centers, and seem to have everything. From bread to Lamborghini's.

Here was the first sign we were in a different culture: 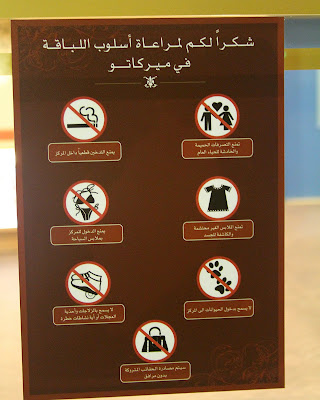 A lot of the billboards and signs were written in Arabic.
Next to this particular sign was a translation into English.
I got a kick out of this one especially: 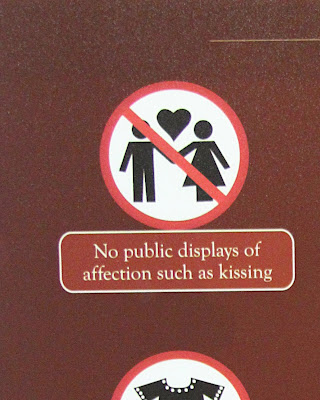 Dubai is very Muslim dominate.
And here I thought that us Mormon's were sticklers for modesty... 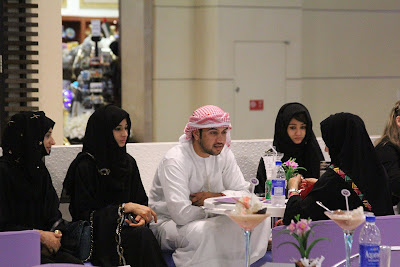 Dubai doesn't really have its own unique culture, but is more of a melting pot, I noticed influences from of course the Muslim religion, India, the Philippines, and the United States. Most people spoke English, but Arabic is the official language. 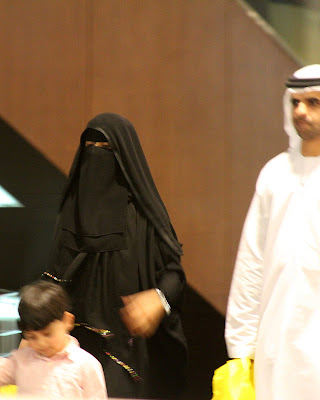 At first it was strange and fascinating seeing Muslim women dressed in the traditional Abaya (black gown) and Hijab (head covering) and the men in Dishdash. But after a couple of days, it became the norm.

One thing that struck me being an observer, was how teenagers are the same the whole world over.
Here were very traditional Muslim people, committed to wearing the Hijab as to not draw attention to themselves.

Teenage girls, in the mall, were dressed to the nines underneath their Abaya's. Wearing high-end stiletto heels. They were pretty girls, wearing lots of make-up and perfume to walk the mall.
The teenage boys definitely took notice...

Funny how that is always the same, even if it is culturally frowned upon. Teenagers will usually push the envelope whenever they can. 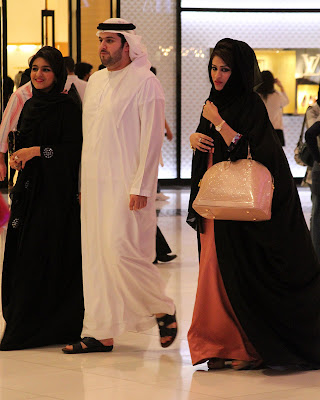 The mall was crowded, and stuffed to the brim with high-end shops.
Manolo Blahnik, anyone? 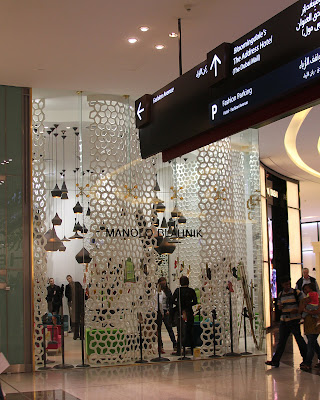 We finished with the grocery shopping, and people watching, and headed back home to try to get some sleep.
Here is the city by night: 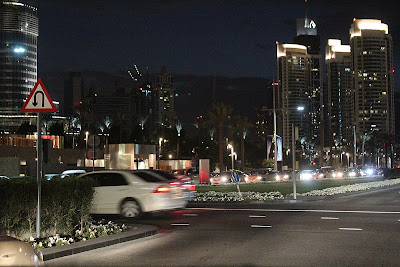 (side note: craptastic photos. Totally the result of forcing the ISO to a bazillion, and shooting from a moving car, and through the windshield.)
More night time street: 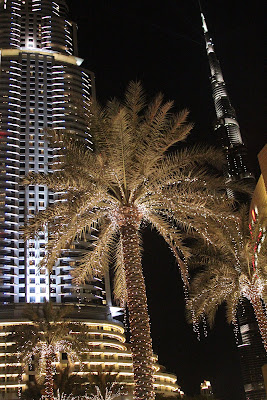 And lastly, I am leaving you with a view of the Burj Khalifa.
The World's Tallest Building.
2,716.5 feet tall.
160 stories.
Did we go to the top?
Not on your life.
I have a hard time looking down from things over 6 feet tall.
It was mind-boggling.
I took the photo, by taking three photos, and photo shop very neatly merged them together. You should click on it, to see it better.

And here is an internet stolen image that shows an aerial view of the Burj Khalifa, so you can get the gist of the magnitude. 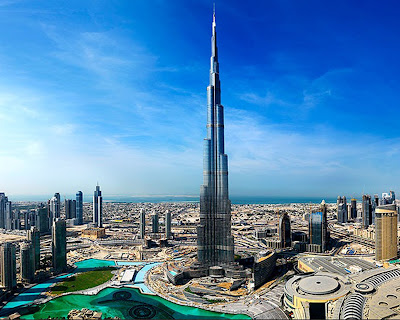 And that, my friends, is our first day/few hours in Dubai.
It is now 2:30 am here, and clearly I am still jacked up with the jet-lag.
I am going to attempt sleep.

WOW, I'm so glad you entered back into the world of blogging, AND that we get to follow along with you and your family in your travels. I think we can all honestly say that we'll probably never take ourselves and our kids to Dubai. I don't even want to go to Disneyland with them all, lol.

Shaunte, your writings are such a joy to read. Thank you so much for making me laugh! I'll have to put your blog on My Favorites! Your photos are awesome too! thanks for sharing!